Back in the old days (November 2017), you could buy a Bitcoin for around $6,000. December saw the rapid rise in value of this crypto currency so that it came tantalisingly close to a $20,000 valuation. Then, five days ago, things changed as speculators fled to the exits and its price crumbled.

By analysing the price and volume relationships, I came to the conclusion that Bitcoin was exhibiting a bearish divergence that looked set to send prices downwards in a second wave of selling.

When I made that prediction, Bitcoin was valued at $16,000 and was moving around its support at that price.

Optimistic speculators were encouraged back into the market and the price did rise as a result, however it was obvious that it was small time speculators fueling this rise as low traded volumes were not showing participation from the professionals.

A classic “dead cat bounce” was in the making.

Bitcoin prices have continued to fall

Without large market participants entering the market with buy orders, it was inevitable that the Bitcoin price would succumb to the wave of selling orders, and that is what has happened over the last 48 hours.

At each support level – $15,000 and $14,000 – there has been a wave of buying by those looking to buy the dip, which has caused some price recovery, but again, this optimism has been wiped out by the selling pressure.

How far will prices fall?

At the time of writing, Bitcoin is now valued at $9,700 having sliced through minor support at $10,000. Selling is accelerating and is now back to the value of Bitcoin at the beginning of December.

The problem for optimistic speculators is that the first major support doesn’t occur until $6,000, as you can see from this chart, which shows how Bitcoin has performed over the last 12 months. 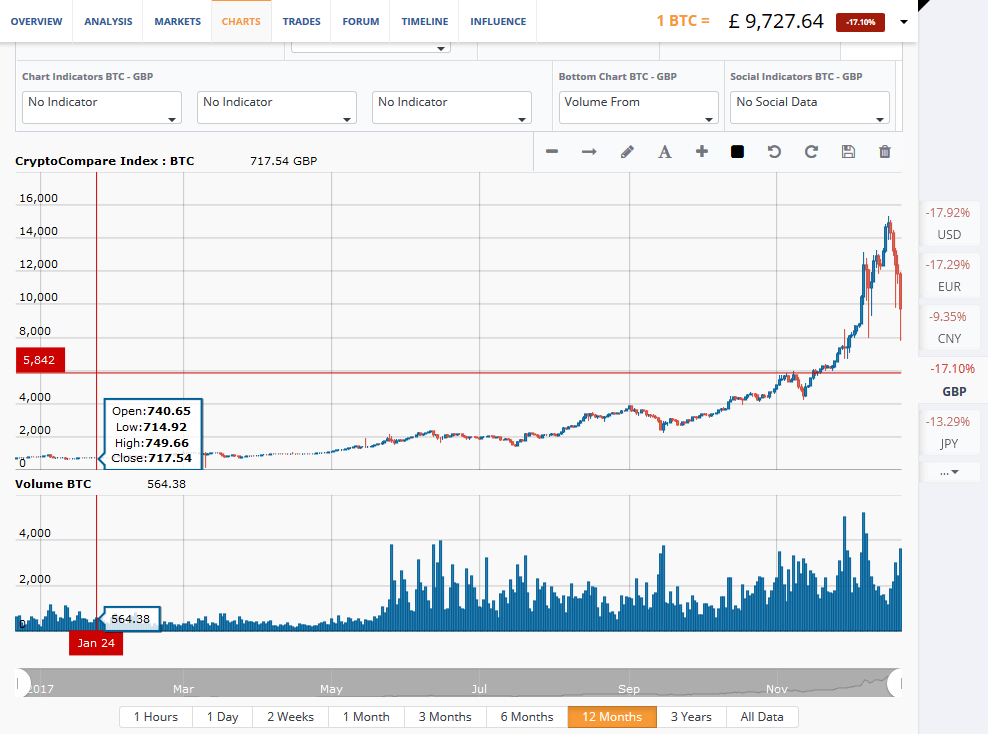 This crypto-currency was relatively stable around $6,000, and had been for a month or so. Given the sustained selling over the last few days, it will take some significant support to stabilise the market.

So my prediction is a sustained fall to around the $6,000 price level. That will shake out many “weak hands”, who, unfortunately, will be looking at large losses, and present some accumulation opportunities for the professional investors.

Will a price of $6,000 create a platform for Bitcoin to establish a more stable up trend, or will sentiment continue to turn against it with further falls? Time will tell!