Bitcoin investors have enjoyed a spectacular ride in December as the crypto-currrency soared in value to approach $20,000. However, speculators were running for the exits over the last twenty four hours as the price of Bitcoins fell by 12%.

Sustained buying had driven Bitcoins upwards, however analysis shows that it is largely inexperienced retail investors who were buying the coin, whereas the larger, more experienced market participants were lying in wait with sell orders locked and loaded to profit from the inflated price and influx of newbie money.

Much can be learnt by looking at the relationship between price and traded volume. If a rally is being supported by investors with deep pockets buying bitcoins in large quantities, rises in price will be supported with rises in traded volume.

If a rally is driving prices upwards, but traded volume falls, this divergence between price and volume is a sure fire sign that the larger market participants are no longer buying, leaving the smaller investor to continue to pour money into the market in the hope that the asset will continue its upwards momentum.

A bearish price divergence, in which price rises, but volume falls, is a warning sign that the rally is likely to crash into a wall of sell orders, waiting to ensnare the late arrivals with a wave of selling. 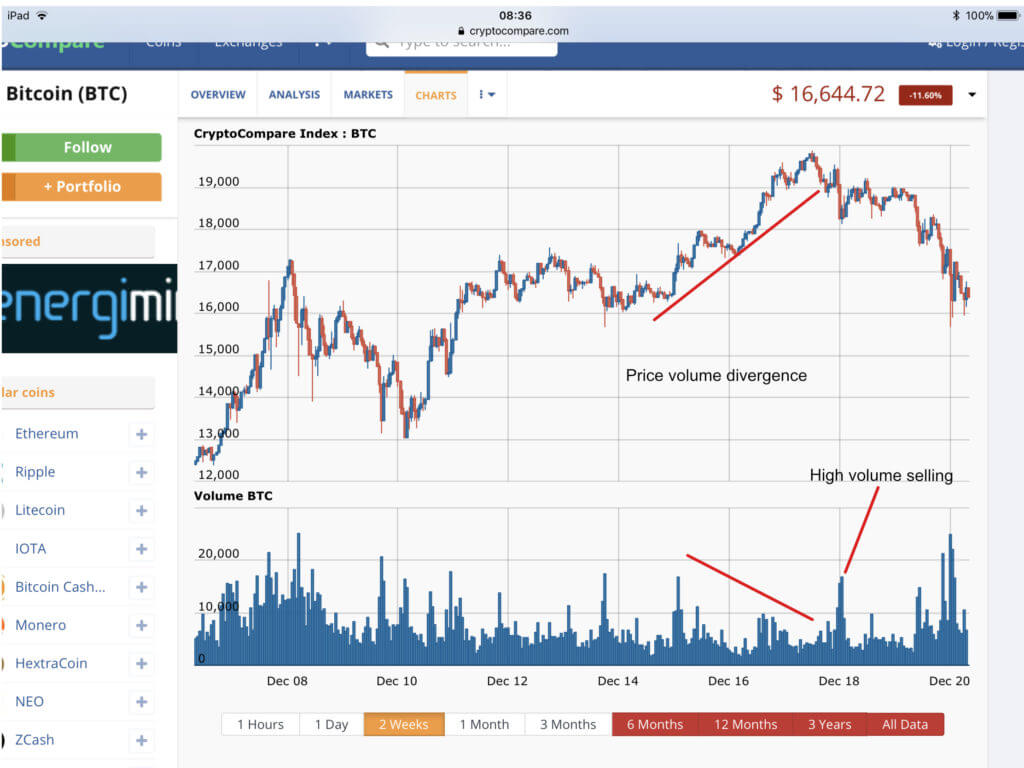 As this screenshot shows, Bitcoins prices have been increasing over the last few days, but as it has risen in value, getting closer to the $20,000 level, traded volume fell, in almost equal measure. This is a text book example of bearish price volume divergence that resulted in large price falls overnight.

Almost at the peak, a wave of selling volume was unleashed, driving the price downwards to a strong support level at $16,000, stripping 12% of the coins value within hours.

Although this price volume analysis indicates the increasing likely hood of an impending retracement, the news that Bitcoin Cash, another crypto-currency that has been competing for attention with Bitcoin, will now be available on the CoinBase exchange, caused that asset to soar by over 200%.

As Bitcoin Cash uses a more modern cryptographic technology that overcomes some of the pitfalls of Bitcoin, the fact that it will now be available on CoinBase, which caters for large numbers of retail traders and investors, it is likely to attract speculators away from Bitcoin at a time when its price was being propped by so called “weak hands” – the small time market participants.

A dead cat bounce for Bitcoin?

The chart above was captured earlier on Wednesday morning, Since then, the Bitcoin price responded favourably to its support at $16,000 and has recovered $1500 of value at the time of writing, as shown in this chart for the last 24 hours. 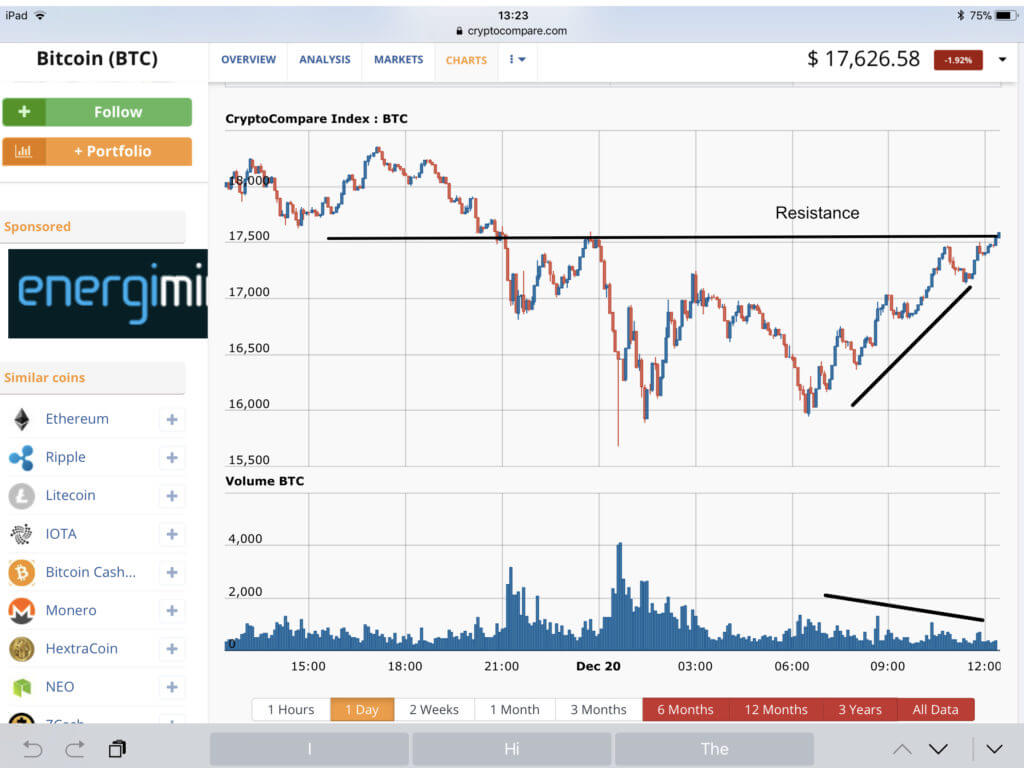 Note the traded volumes, though.

It is clear that many speculators have rejoiced by this fall in Bitcoin price and see it as an opportunity to load up with more “cheap” coins. This “buying the dips” optimism could prove highly profitable if this recent price fall was just a profit taking retracement to consolidate the upwards trajectory.

However where are all the market big hitters? This rebound looks impressive, and I am sure that many Bitcoin speculators are heaving a huge sigh of relief.

It looks like another text book price volume divergence is being set up again, so will we see another leg down in the next days or so?