Home
Thatch Insurance
Why are thatched roofs so desirable?
Prev Article Next Article

When many people think of a typical rural village they will imagine a row of pretty thatched cottages, each adorned with roses and painted in pretty pastel colours. You could probably include a picturesque and inviting pub in that mental image, to top it off, a long forgotten red post box to invoke those feelings of timelessness. 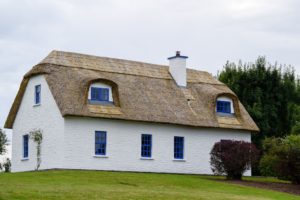 This is probably an idealised image of rural life in the UK, but villages like this do exist, and thatched cottages are here to stay for the simple reason that they are often sought after and highly desirable.

But what is it that makes a thatched roof so appealing? This is what we examine in this article.

Thatched roofs have been around for centuries

Thatched roofs have been around for centuries. In fact, thatch was the only form of roofing material available in rural areas. Water reeds were available in many rivers and with skills passed down generations, were a cheap method of creating roofs.

It was only in the early 19th century that slate started to be mined and the building of canals and railways made transporting this heavy, but durable, material to towns and cities.

Because of its cost, it became more prestigious to own a house with a slate roof and owning a house with a thatched roof became associated with poverty and rural decline. With work running out, thatchers looked for other areas of employment, spiraling the industry downwards.

Environmental concerns and provenance are rejuvenating the thatching industry

Rather like oysters which in the Victorian times were seen as food for the poor, but are now on the plates of wealthy people, thatched roofs have swung back into favour and are also seen as a sign of wealth. 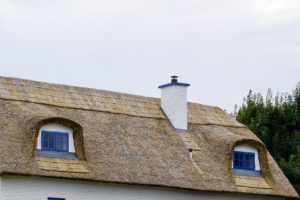 A greater emphasis on using sustainable building resources and provenance is stirring up an interest in restoring thatched roofs rather than replacing them with tiles. Some house owners are even replacing their tiled roofs with thatch if they feel that it will add to the beauty of their homes, particularly if they live in an area with other thatched cottages.

This resurgence in thatching is encouraging a more viable market for thatchers. Their numbers have increased to about 1000 in the UK, as a result.

Thatching is also emerging as a desirable occupation as it is skilled, hands on work with environmental benefits. Being a thatcher attracts kudos in much the same way as an artisan baker does.

Owning a thatched cottage is now seen as a status symbol, which is far removed from the associations with rural poverty 200 years ago.

There are some delightful villages in Northamptonshire and Dorset, but generally it is villages in the Cotswolds and around Oxford that are particularly appealing.

Those looking for a second home in a rural area will often search for a thatched cottage that matches the mental image painted at the top of this article. So, too, will tourists who seek rural thatched bed and breakfast establishments as they strive to experience how life was in rural England in years gone by.

There is no doubt that thatched roofs are here to stay, even if they are costly to maintain and come with safety and insurance concerns.