Home
blog
Diane
Is it Time to Use a Fountain Pen?
Prev Article Next Article

A fountain pen for many will bring back memories of school and piles of blotting paper, it certainly does for me. But in this electronic age with so much use of email, social networks and texting, is there space for the fountain pen? 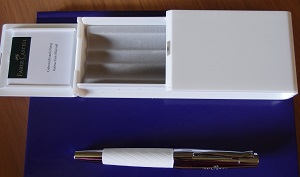 Time to use a Fountain Pen

Before thinking about the use of a fountain pen, what actually is it?

‘A fountain pen is a nib pen that, unlike its predecessor the dip pen, contains an internal reservoir of water-based liquid ink. The pen draws ink from the reservoir through a feed to the nib and deposits it on paper via a combination of gravity and capillary action.’

Amazingly, the earliest historical record of a reservoir pen dates to the 10th century when in 953, Ma’ād al-Mu’izz, the caliph of the Maghreb, wanted a pen that didn’t stain his hands or clothes.

He was provided with a pen that held ink in a reservoir and delivered it to the nib, which could be held upside-down without leaking,

It wasn’t until the late 19th century though that mass production of fountain pens got underway. At this time Waterman was a market leader and remained so until the early 1920s.

Why use a fountain pen?

With ballpoint or rollerball pens so easily and cheaply available, many have turned have to use them on the increasingly rare time writing by hand is needed. Increasingly rare as of course so much of our ‘writing’ these days is done via electronic means.

Despite this, interestingly enough in recent times, according to an article in the Telegraph, fountain pen sales have been significantly increasing over the last year or so.

Some consider a fountain pen rather like a good watch or piece of clothing, it conveys a sense of style.

Doctors, lawyers and some teachers tend to use them to perhaps convey an extra layer of respectability to official documents.

This same declaration of respectability, quality and intent is also true when using a fountain pen in the world of business.

Fountain pens are also still considered valued gifts for graduation presents or for a first day of work.

Perhaps not too surprisingly, many of us have old or even vintage pens that may now be collectors items and worth a considerable amount.

It is time to start using a fountain pen again?

At school and in my first few years working for a bank and then an insurance broker in the City of London, I loved using my fountain pen. I had a lovely deep blue Waterman which I received as an 18th birthday present. Somehow over time though I stopped using it. I do still have it, somehwhere!

I was recently given the opportunity to try a Faber-Castell E-Motion Guilloche Rhombus fountain pen.

As you can see from the picture this exudes quality. It came in a good quality box too which is particularly great if you’re like me and want to protect your pen in your handbag when out.

The ink cartridges are easily loaded and I’ve opted to use these rather than use an ink supply which you can do if you prefer.

It’s quite a weighty pen which suits me.

I initially thought the barrel was slightly too big for my relatively small hands, however, after some use I found this absolutely not to be the case. I just needed to get my hand used to not using a cheap, thin ballpoint pen and I then found that the barrel is actually very comfortable to hold and work with.

I had the pen with me the other morning when, whilst having a coffee with some of the Mums from school, I needed to write some directions down. Needless to say I used my fountain pen and got some very positive feedback from the others round the table. It certainly does look good and makes a real quality style statement I believe.

Whilst I may not use it all the time, I’ll certainly be making a lot of use of my new fountain pen as I really do feel, whether business or personal, it conveys a true sense of quality – and what’s more it seems to help make my writing more legible!