Home
Trades
The Benefits Of An Automated Trading System: Patience Is A Virtue
Prev Article Next Article

A good automated trading system manages risk and performs trade management in a completely emotionless way. As long as the system works well, then it has a real benefit – far more patience and discipline than the human trader, as you can see in this article. 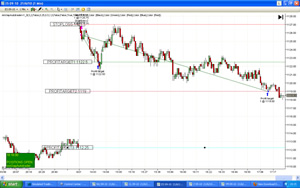 The mnGapAutotrader is an automated trading system that trades the opening gap created when after hours trading activity creates a significant difference between the opening price of an instrument and its close the day before.

Opening gaps present good trading opportunities as there are a number of known parameters which are rare when it comes to trade management. As opening gaps have a high probability of being closed by intraday trading, fading the opening gap can be profitable and is ideal for trade automation, as performed by the mnGapAutotrader.

Today was an excellent example of how it would take an exceedingly patient and disciplined human trader to beat an automated system.

mnGapAutotrader was set up to trade the S&P 500 futures market (ticker: ES) on a one minute chart. The announcement over the weekend that China was to loosen its control on the value of its currency (the Yuan) created a very large opening gap up between Mondays opening price and the previous Fridays closing value.

The autotrader was looking to fade the gap and placed a short trade with three contracts when momentum moved the price in the direction of gap fill. You can click on the image above to enlarge it.

The first profit target was soon hit, however buying activity forced the futures upwards again and nearly stopped the trade out. I believe that a human day trader would have terminated the trade at that point, but the system hung in and after several hours the second profit target was achieved, making this a very profitable trade.

As opening gap trades are normally finished within 30 minutes of the open, it is rare for a position to be held for so long using this type of strategy. A human trader would probably have bottled out and taken the large amount of money on offer at profit target two. The system hung on, however. And hung on.

We eventually had to close the office at 6.30pm and manually shut the system down for an $823 profit, which from a three contract position is excellent. So the autotrader out did us for patience and resolve!