Have you noticed something sneaky going on at your local supermarket? Prices of many items are remaining the same, but portion sizes are getting smaller. 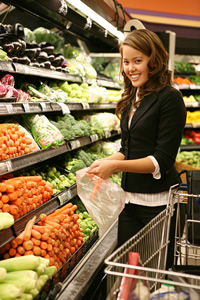 The powers that be in supermarkets know that we consumers are feeling the pinch at the moment. High petrol costs, rising inflation and increased taxes are all tugging at the purse strings.

Money is tight for consumers and yet supermarkets have to keep boosting their profits to keep their shareholders happy, so how are they doing this?

Well it seems to be quite sneaky, but we are on to them.

Supermarkets are keeping the prices of many of their items the same, so our food bills don’t seem to be going up too much, but we are actually buying smaller portions of many items.

I first noticed it with a pack of sausages from Sainsburys. The same sausages in the same wrapper and for the same price, but something was different – each sausage was about 10% smaller than when they were last bought.

They just seemed smaller on the plate somehow. In effect the cost of those sausages, by weight, has gone up, probably by around ten percent.

Have you bought chocolate lately? Ever since it was bought by Kraft, Cadbury’s has sneakily reduced the sizes of many of its chocolate bars, yet kept the prices the same.

For example, what was a 140g bar of Dairy milk now weighs 120g, yet the price remains the same at 99p. Those two fewer squares boost Kraft’s profits, yet dupe us into ignoring the fact that we are now getting less chocolate for the same price.

Whilst it is not the supermarkets fault that suppliers like Cadbury’s are doing this, they are suffering from large rises in transportation costs – always a major factor for large supermarket chains – and the cost of the raw materials from which our food is made is also rising, so price rises at the checkout are inevitable.

What we object to is that consumers are being conned. If prices have to go up then at least let us know so that we can make an informed purchasing decision. Sneakily reducing portion sizes yet keeping the price the same just undermines our trust.

Have you got any examples of sneakily reduced portion sizes? Let us know in the comments below if you have.