As a country that spans a continent, the US is blessed with some of the most diverse scenery on earth. A lot of the most spectacular locations in the United States are preserved in the expansive National Park system. No matter where you are in the country, you’re probably not too far from some superlative natural phenomenon. 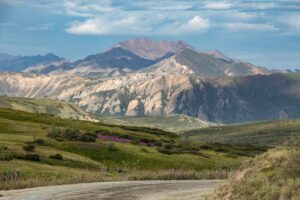 Every national park has something special and unique to offer. But there’s always something thrilling about seeing the biggest, oldest, deepest, or longest of its kind. Here are some of the most supersized places in the country.

No prizes for guessing the tallest mountain in the entire United States is in Alaska. In fact, all of the top 10 tallest mountains in the US are in this northern state. But among these giants, nothing matches Denali.

At 20,000 feet tall, this mountain would be spectacular no matter what. But it’s also not surrounded by other mountains, making it seem even taller as it rises from the ground below. This is referred to as prominence, and Denali is the 3rd most prominent mountain on the planet, after Everest and Aconcagua.

Due to its mountainous terrain, Alaska isn’t the easiest place to get to. If you’re determined to see the tallest mountains the US has to offer, it’s well worth the trip. But if you want to stay in the lower 48, visit Sequoia National Park to see Mount Whitney, the tallest mountain in the contiguous United States.

Sequoia National Park also has another record holder that you’ll find further down this list. So a trip to California may well be in order.

On the subject of California, Yosemite National Park is one of the state’s — and the country’s — most visited locations. With its stunning mountains, endless forests, and glittering rivers, it’s not hard to see why. California may be the most populous state in the union, but Yosemite is a true unspoiled wilderness. 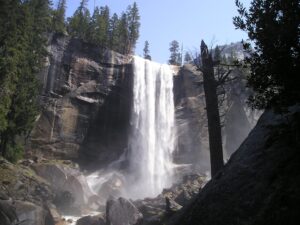 In this wilderness, you’ll find the tallest waterfall in the United States. Yosemite Falls drops 2425 feet from the top of a granite cliff to the river below. It’s an awe-inspiring sight, and one of the most photographed places in one of the most visited parks in the entire country.

Yosemite’s popularity is partly due to the fact it’s not far from San Francisco, San Jose, and Sacramento. But it’s also surrounded by national forests and other beautiful parks. As one of the easier National Parks to get to, there’s really no excuse not to visit.

It’s not called the Grand Canyon for no reason. Any list of the most impressive natural attractions in the United States sooner or later has to include this legendary location. Although the Grand Canyon is located in Arizona, the nearest city is over the border in Nevada, and most people visit the Grand Canyon from Las Vegas.

If you’re visiting the Grand Canyon, it’s a good idea to leave your bags back in the city so you don’t have to leave them in your car while you explore. National Parks are generally safe places, but the presence of tourists sometimes attracts people who prey on them. you can easily find a luggage storage service in Las Vegas before setting out on your trip.

Even from Sin City, it’s more than four hours of driving to reach the Grand Canyon. But it’s worth it to see the longest canyon in the United States. While the Grand Canyon may not be the deepest in the country — that honor belongs to Hells Canyon in Oregon — it is the most famous, and arguably the most spectacular.

The bright blue waters of Crater Lake can appear almost otherworldly. Formed by the caldera of an extinct volcano, this lake is almost 2000 feet deep, making it the deepest in the United States and one of the deepest in the world.

No rivers flow into or out of this isolated lake. The water comes purely from rain and snow, which is why it has such startling clarity. The lake also sits at an elevation of over 6000 feet, adding to the sense of unreality you get when visiting here. 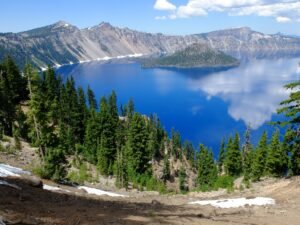 The lake can be reached on a 140 mile, two and a half hour drive from Eugene, Oregon. Like most of the national parks on this list, it feels like a completely different world.

The redwood forests of California are home to some of the oldest and biggest trees in the country. The aptly named Sequoia National Park exists to protect these giant sequoias and the unique ecosystem they are part of.

Sequoia National Park is home to the biggest tree not just in the United States, but in the entire world. General Sherman, as the tree is known, is estimated to be around 2000 years old. With a circumference at the base of over 100 feet, this tree absolutely dwarfs anyone who stands next to it. On busy days, you may even find a line to get your photo taken with this ancient giant.

General Sherman might be the biggest tree around, but he isn’t the tallest. The tallest tree in the world is known as Hyperion, and is a coastal redwood that lives in California’s Redwood National Park. However, the exact location of this nearly 400 feet tall tree is kept secret to avoid damage to the plant by tourists.

From the tallest peak to — well, the opposite of that. Badwater Basin in Death Valley National Park has the lowest elevation of any place in the United States, at 279 feet below sea level. 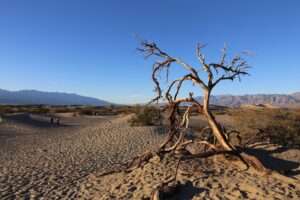 Partly because of this low elevation, and partly because of the desert that surrounds it, Death Valley National Park also holds the record for being the hottest place in the United States. In fact, on July 10, 1913, this valley had the hottest temperature ever recorded on the earth’s surface at 134 degrees Fahrenheit.

You would think that a place as inhospitable as this would be far away from human civilization. But in fact, this is another unique national park that can be easily visited from Las Vegas. At only 110 miles from the Nevada city, it’s a popular place for a day trip. But make sure you bring plenty of water.