With the current economic climate forcing many of us to reign in our spending, and cut costs wherever possible, it’s increasingly important to be as inventive as possible to get your bills down. Luckily, one of the best places you can do this is in the area of mobile broadband, simply because it’s such a competitive marketplace right now. 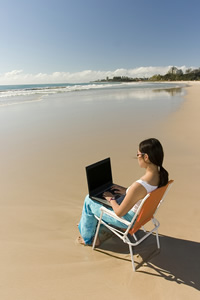 With more and more people realising that going mobile can be a real boon for staying connected pretty much wherever they go, there are almost endless deals and offers out there that will be perfect for your needs.

However, with some careful comparison beforehand, it’s also pretty quick and easy to ensure that you plump for the right package, rather than signing up for something that’s not quite right.

Getting the right mobile broadband deal starts off with a trip to one of the free to use comparison websites, that will allow you to get an overview of all available deals and offers in one handy location.

Going down this route also allows you to see what incentives are being offered by mobile network operators and you can be pretty sure that at any given time there will be something of value worth having.

First up, you’ll want to see what’s included as part of any deal and also decide if you want a contract or pay as you go package.

If you’re a relatively light internet user then a pay as you go deal could be a real money saver as you only pay for the time you’re online and there’s no contract involved. Bear in mind though that contract deals are often more generous with things like data allowances.

What that means is that the greater freedom you have with data allowances then the more you can download (and upload) per month. Pick a package that’s too small for your needs and you could end up paying more if you start going over the allocated quotas.

Online comparison guides can give you great pointers when it comes to knowing the right amount for your needs.

Look out too for mobile broadband deals that come with free gifts, such as a dongle or extra airtime or minutes plus additional calling features that will add value. Check the small print and terms and conditions of any offer though to ensure you know the full costs over a period of time, rather than the first month or so. If you’re looking to get some new kit then keep an eye out for the mobile broadband deals that come with a free laptop.

There are a few of these around, although remember that the laptop might be yours to keep at the end of the contract, but it will probably be a longer term deal and the price of the hardware is essentially factored into the contract package. It’s a good way to get up and running with mobile broadband and a new computer at the same time though.

Another increasingly popular option for people who might be in the same house or travel together on a regular basis could be the MiFi. This is a device that is similar to the wireless router that you might use for a home broadband connection.

The difference with the MiFi is that it allows you to share your mobile broadband contract with up to five other authorised users. Data allowances are spread over these users, but with careful usage this can be another way to not only spread, but cut, costs too.

About the author: Rob Clymo contributes on behalf of Mobile Broadband Genie.