Shopping online can be simple and a great experience. Buying food online though can, in our experience, be a little more tricky. Not any more! We’ve found a fabulous online food store of great British farm produce, delivering excellent and interesting foods directly to your door. 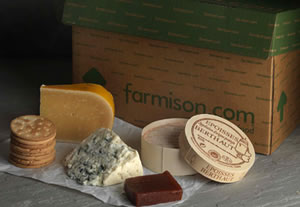 Farmison.com has been established as ‘an internet shopping site for foodies, where small producers with excellent food to sell (but little or no expertise in marketing and internet retailing) could do business with consumers looking for a convenient but delicious alternative to supermarket shopping’.

What’s more it offers consumers access to the same fantastic food as used by great chefs and top restaurants.

It offers a wide range of delicious produce from the online butcher, greengrocer, cheesemonger and traditional pantry and represents over 75 of the best independent British suppliers.

You can, for example, buy cheese online from Farmison, choosing from over 45 different cheeses.

Artisan cheese is manufactured by hand using the traditional craftsmanship of skilled cheesemakers and as a result are often more complex in taste and variety, a real contrast to the large scale cheese produced for supermarkets.

Artisan cheese making is increasingly popular and through Farmison you can try some of the superb cheese made by the new generation of passionate, small-scale cheese-makers.

We did just that, to see truly how the hand-picked cheese faired. Stunningly well is the best description!

We had a collection of Continental cheese, including

accompanied by some Stag Water biscuits and a Quince paste.

The box of cheese arrived by courier and was extremely well packaged, surrounded by what looked like a variant of straw. All the contents appeared to have travelled well, although unfortunately we found a number of the water biscuits were broken which was a shame – didn’t of course detract from their taste though.

The Coolea was first to be tried. The package label described it as ‘Firm and crystalline in texture with distinct notes of caramel’. It looked like a Gouda on opening and in fact on checking the website it describes it as ‘A firm Irish cheese, Dutch inspired with a rich, sweet flavour. An award winning Gouda-style cheese.’ It certainly hit the spot and as one of the MoneyHighStreet team said ‘It was the best Gouda-like cheese I’ve ever tasted.’

Next the Roquefort. Nothing like the supermarket versions so many of us have tried. It’s so creamy, with a strong but delightful flavour. Fabulous with the crisp water biscuits.

Finally the Epoisses Bethaut. A very strong smelling cheese which on first seeing none of the team recognised as having had before. The label on it simply said ‘Traditional burgundy cheese washed with Marc de Bourgogne’.

According to the website it’s a famous French cheese which packs a powerful punch. It certainly does! That said it’s somehow creamy too, delicious. Apparently you can bake it whole in the oven and share – we read that a little late though, in fact when the majority of it had already been gulped down. Maybe another time?

Overall this cheese tasting has given a number of us ideas to move away from the standard supermarket offering, or at least to on occasion turn to the wonders of the Great British produce offered via Farmison.

I don’t think it will be too long before we try some of the other produce available either!