Home
blog
Am I “Mr Despondent” about house prices?
Prev Article Next Article

At first glance, the news from Nationwide that house prices rose by 0.9% in September seems great.

It was the fifth straight month that the Building Society has recorded house price rises.  Not only that, house prices have recovered their 2008 values.

Oh, and the house prices in September were rising across all regions, according to the Nationwide.

I’m not rushing to open the Champagne just yet, because there is a sting in the tail from the Nationwide.  The supply of rental properties on the for sale market is increasing.

We all know that markets are built around supply and demand and if supply goes up, but demand remains the same (buyers still struggle to get mortgages), then what happens? Prices come down, unfortunately.

There is another fly in the ointment and that is that the turnover of properties is way below normal levels.  The percentage of private housing stock changing hands each year has fallen to 3%, whereas it was between 7 and 8% at the height of the market.

In abnormal markets conditions as we have now Mr Gahbauer does state that “However, during periods when only a small proportion of the housing stock is available for sale, even a relatively low turnover rate can be consistent with increasing house prices.”

“There is widespread evidence that this has been the case so far this year, which explains much of the rebound in house prices since the February trough.”

So I take from this that low market activity is generally associated with stagnating house prices, however small increases in turnover, as has occurred this year, can feed through to higher house prices. 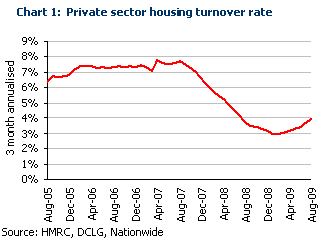 This graph shows a slight up turn in housing turnover which correlates to the rise in house prices seen by Nationwide over the last five months.

Will that graph keep going upwards?  Well, unemployment looms large on the one hand, and so called reluctant landlords seem keen to sell their rental properties on the other.

Unless more buyers come into the market and are in a position to actually purchase then these negative influences may have a negative effect on the housing market in the next few months.

So am I “Mr Despondent” about house prices?  Well I probably am – just a bit though.